This is NOT Feminism 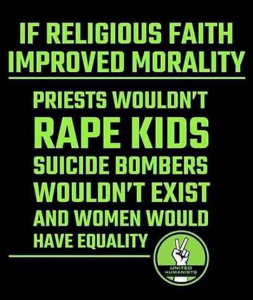 Many people mistakenly believe that matriarchy is the goal of feminism and that’s not the case. The feminist wants equality, but a matriarchy isn’t equality. In a matriarchy, men are powerless. Just like women are right now in the current patriarchy that plagues the earth. A few females in high positions does not make for equality. In the US only 18.3% of congressional seats are held by women, ruling over a country that’s probably made up of 50/50 men and women.

The patriarchy is alive and well here in the US, according to this definition:

It is, quite simply, a social system where men are the primary authority figures in the central societal roles of (a) political leadership, (b) moral authority, and (c) control of property. In short, a system where men primarily hold power and influence.

If you think government is a mess, corporate America is actually worse, with only around 4% of women in CEO positions at Fortune 500 companies. And in churches, women make up only 10% of leadership. In the nonprofit world, where 75% of workers are female, only 21% of leadership is female.

In 2014, the AAUW (American Association of University Women) put out an article entitled “10 stats on Women’s Equality that might be scarier than Halloween.” Among the scary stats they featured were the following:

When it comes to caring for future generations of citizens, over 32% of families with a female head-of-household (divorced or single mothers) are living in poverty.

Women make up only 14% of the engineering work force (and 6.7% graduate with STEM degrees as opposed to 17% of men)

24/50 US states have never once elected a female governor

The US ranks 60th globally in women’s political empowerment

More than 22 million working women do not have paid sick days (in spite of the fact that over 50% of working mothers have had to take time off (unpaid) to care for a sick child.

In 2014, over 500 laws were submitted to state legislatures that placed restrictions on women’s bodies, while zero were targeted at men.

Feminism would seek to bring women’s representation up to 50% in al corporations, governments and other organizations.

Matriarchy would rather see an imbalance of power similar to what we have now, only skewed in the opposite direction, where men were not represented or given authority in any domain.

The purpose of this site is to start a conversation about a Global Matriarchy, not feminism.  I’m a fiction author, working on a project right now that is set in a dystopian matriarchy that covers the earth.  In my story, the men aren’t only oppressed, as women are today, they’re nearly eradicated.  After 990 years of peace, some of them are thinking it’s time to bring men back and allow them to mix with females in their modern, peaceful society.  Will the women in charge allow this subspecies the opportunity to take hold of society once again, or will the few men on earth remain imprisoned for breeding purposes?

If you’re interested in my book, subscribe to the newsletter to be notified of the release of the prequel, as well as the launch of the novel itself.